America has a number of people with different ethnic backgrounds despite that, there are norms and characters that are similar among most Americans. Jeans are more like part of the American culture, they are the most commonly worn clothes. they are comfortable, very long-lasting, and widely available that when many Americans would wear jeans a home. 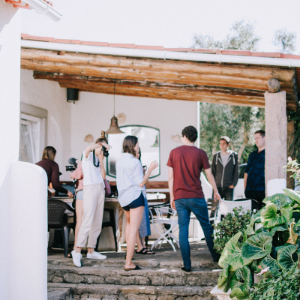 From the time jeans were seen as fashionable and not just clothes for hard labor workers. They are worn a lot but American for reasons such as:

As you might have experienced the comfort of wearing jeans, many Americans wear jeans in their homes for comfort.  You can wear jeans for practically many activities at home making them ideal for homestay.

2. They are widely available.

Most Americans own jeans making it obvious they would put them on even at their homes. . In fact some Americans only have jeans in their clothing collection.

3. The ease in wearing jeans.

With jeans, one doesn’t have to iron or straighten the cloth. Jeans can’t get wrinkled making them a preferred choice for many.

Some jeans can keep you warm especially during winter time or cold days.

Whereas for the shoes yes most Americans have them on even in their homes. Some of the reasons include:

The floors can get pretty cold in some seasons and one would definitely need to have theirs on.

Having shoes on at home has never been a big deal to  Americans. It’s something Americans have grown up doing and seeing happen more like part of their culture.

Some Americans wouldn’t remove shoes cause that’s not their home. It could be perceived as getting too comfortable at someone else’s home. Or maybe they would be leaving shortly and don’t want the inconvenience of removing shoes.

So long story short Americans wear their jeans and shoes at home and it’s so normal in America.