Jeans are trousers made from denim or dungaree cloths, but denim is woven and then dyed, whereas dungaree is woven from coloured yarn. The name Jeans was derived from the city of Genoa, Italy, where cotton corduroy, known as jean or jeans, was produced and exported throughout Europe.

By the time Strauss discovered denim jeans, they had become very popular in France. It’s made of heavy twill-woven cotton that’s extremely durable and quick to dry, making it a far superior clothing fabric to canvas. The jeans were dyed with synthetic indigo that was a fraction of the cost of genuine indigo. Indigo is a natural choice because it was used to create a nice deep dark blue colour that hides stains and dirt while also lasting a long time even after multiple washing steps.

In the year 1851, Levi Strauss travelled from Germany to New York where his brother held dry goods store as a family venture. Hence, Levi Strauss went to San Francisco in March 1853, at the age of 24, to establish a West Coast branch of his brothers’ wholesale dry goods business in New York. Strauss built his business empire into a very successful business venture over the next years, establishing himself not only as a businessman but also as a local social reformer. Before he came there, a Gold Rush began in California in 1848. Miners needed strong clothes that would withstand rough working conditions. 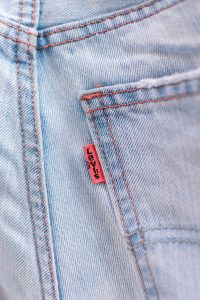 A local labourer’s wife once asked Jacob to make her husband a pair of long-lasting pants. Jacob devised a strategy to reinforce his pants by inserting metal rivets at stress points like the pocket corners and the base of the button fly. The riveted pants became an instant hit. Jacob decided to immediately apply for a patent on the process, but he needed a business partner to help him get started.  He then remembered Levi Strauss, where he’d gotten the fabric for his riveted pants.

Davis eventually contacted Levi and proposed that the two men work together to keep the patent intact. Levi, as a wise businessman, saw the potential of this new product and agreed to Jacob’s proposal. On May 20, 1873, the two men received patent #139,121 from the United States Patent and Trademark Office. Levi Strauss & Co. then hired Jacob Davis to oversee the production of the riveted pants. The first riveted clothing was created and sold not long after. These two used denim, the traditional fabric for men’s workwear, to make their first pair of jeans. The jean became a genuine hit in a relatively short period of time.

On May 20, 1873, a historic event occurred: the birth of the blue jean. Levi Strauss and Jacob Davis were granted a U.S. patent for the first time for the process of riveting men’s working trousers. Levi Strauss was a Bavarian-born dry goods trader who came to San Francisco in 1853, at the age of 24, to establish a West Coast branch of his brothers’ wholesale dry goods business in New York. Strauss built his business empire into a very successful business venture over the next years, establishing himself not only as a businessman but also as a local social reformer.

Even after they were well received, the new jeans struggled to meet the demands placed on work pants by hard manual labor in the 1870s, such as mining. The jeans had a lot of flaws, like the corners of the pockets and the bottom of the button fly. Miners needed jeans that could withstand the weight of heavy gold nuggets in their pockets, and the stitching at the bottom edge of the pocket would frequently rip. Levi added copper rivets to the jeans to reinforce any weak points in the pockets to completely counteract this effect.

The launch of Levi Jeans Design 501 was such a success that Strauss became extremely wealthy. The design was such a success that they did not undergo any major changes for the next nearly 100 years. Despite the fact that they have become slightly thinner in the last fifty years, offering a tighter fit. With the increasing demand for hard-wearing denim jeans, two other new companies desiring to capture a share of the denim market, such as the H.D. Lee Mercantile Company, established in the USA in 1898, and The Great Western Garment Company (GWG), founded in Canada, in 1911, were established.

From there on the denim market and industries rapidly spread throughout the world.  Over the years, many trends and fashions have emerged, and almost everyone owns at least one. We all can appreciate the greatness of denim clothes.